Christopher volunteered for Company G, 2nd Massachusetts Heavy Artillery on December 4, 1863. He was captured in Plymouth, North Carolina in April of 1864 and died while a prisoner of war. His military records each carry a variety of dates for his death- August 30, 1864 at Andersonville, Georgia, September 15, 1864 at Andersonville, and October 1864 in Charleston, South Carolina. 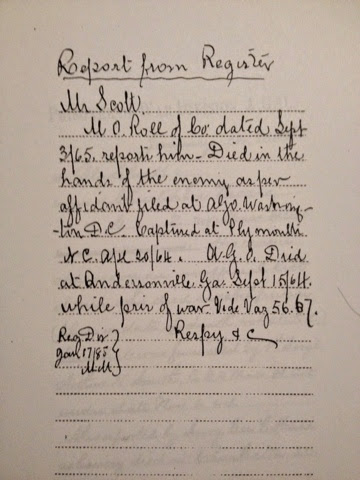 His widow’s pension application (and after her death, his son Albert’s pension record) discuss the various dates and settle Christopher’s date of death on August 30, 1864 from chronic diarrhea.

Diannah Vickers died on October 11, 1877. Her son, William, passed on March 9, 1878. Son, Albert Vickers successfully applied for the pension in his own right.
Christopher Vickers was not the only Nipmuc casualty of the Civil War. His older brother, Rufus Vickers (3 July 1824 – 6 November 1864), also perished at Andersonville. Others who did not return include Daniel Gigger, William H. Cady, and Hezekiah Dorous.
More the next time we meet…
Aquene,
Cher

Cheryll Toney Holley, proprietor of PastTense Historic Research, is a professional researcher and writer specializing in African-American and Native American peoples in New England. For more than 20 years, she has compiled genealogies and written family histories for descendants of New England's communities of color.  A trained historian, she also directs the Hassanamisco Indian Museum located in Grafton, Massachusetts.